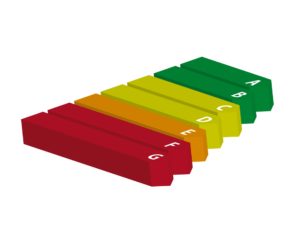 The concept according to the United Nations:

More recently, on the occasion of World Environment Day, UNEP (United Nations Environment Program) has disseminated the following concept of a green economy: “an economy that produces human well-being and social equity, while reducing environmental risks and ecological scarcity. In its simplest form, a green economy can be thought of as an economy that is low carbon, resource-efficient and socially inclusive”

As an example, Italy has been accepted for energy and climate needs as being generally similar to many other states, not being considered as a northern or southern state, and therefore representing an average.

The residential and tertiary sector accounts for about 40% of the total thermal energy used; from this it is clear that intervening in the energy efficiency of buildings is the obligatory way to go.

From this need arose the assignment to put all the country’s building legacy under examination for a specific energy class, based on the annual primary energy requirement that is needed to heat every square meter of floor area measured in KWh / m2. year.

Annex 1 to the above decree defines the new national guidelines for the preparation of the EPA, namely certification of the Energy Performance of buildings.

Table A – Standard technologies of the reference class A1 building with a global non-renewable unit of energy performance index: EPgl,nren ≤ 1,00 EPgl,nren,rif,standard (2019/2021)

Winter heating: Gas fueled furnaces (natural gas) in compliance with the requirements of Table 8 of Appendix A to Annex 1 of the DM minimum requirements and with relative efficiency utilizing any of the subsystems referred to in Table 7 of the same Appendix.

Summer air conditioning: Electric motor vapor compression cooling machine in compliance with the requirements of Table 8 of Appendix A to Annex 1 of the DM minimum requirements and with relative efficiency utilizing any of the subsystems referred to in Table 7 of the same Appendix.

Ventilation:   Single flow mechanical ventilation for extraction in compliance with the requirements of Table 9 of Appendix A to Annex 1 of the Ministerial Decree.

Domestic hot water:  Gas fueled heater (natural gas) in compliance with the requirements of Table 8 of Appendix A to Annex 1 of the DM minimum requirements and with relative efficiency utilizing any of the subsystems referred to in Table 7 of the same Appendix.

Lighting: Compliance with the requirements of paragraph 1.2.2 of Appendix A to Annex 1 of the DM minimum requirements.

Transportation of people or things: Compliance with the requirements of the DM minimum requirements.

The scale of the ten classes of energy efficiency (from A4, the best, to G, the worst), is defined starting from the value of the non-renewable global energy performance index of the reference building (EPgl, nren, rif, standard (2019/21)), calculated according to the provisions of Annex 1, Chapter 3 of the Minimum Requirements Decree, assuming that it contains building elements and standard installations for the reference building as per Table A, provided with the minimum requirements of the law in force from January 1, 2019 for public buildings, and from January 1, 2021 for all others. This value is set as the separation limit between classes A1 and B. In fact, in the scale of the ten classes of energy efficiency we have the following ranges of values of the indices EPgl, nren rif.standard (2019/2021) = Non-renewable Global Primary Energy

The Energy Performance Index is one of the most significant parameters in determining the commercial value of a building.

A class A apartment, in fact, has a much higher sales value than one in class G or F (even 25% – 30%) as it is less energy-consuming and as a result the higher price paid for the purchase is amortized with a reduction in energy consumption which translates into economic savings of the so-called running cost.

From January 1, 2012, in the event of a transfer offer only for the consideration of buildings (excluding transfers by gift and between family members) or individual housing units, commercial sales announcements must state the Energy Performance Index (EPgl) ) contained in the APE Energy Certification Certificate.

The adoption of the Spring system in new buildings and renovations, both in the civil and service sector (offices, schools, hospitals, etc.), entails a significant economic saving in the management of the heating service of the building legacy.

In fact, at the energy costs of July 2018, considering only the heating environment for an apartment in climate zone E and in energy class D, comparing the costs of running the Spring system with other systems:

All the savings indicated in economic terms translate into lower emissions of greenhouse gases; therefore, the use of the “SPRING” system contributes considerably to the achievement of the objectives of international climate protection agreements.

Finally, it should be borne in mind that when using the Spring system in place of the above mentioned systems, in addition to savings in economic management, the property’s energy class is improved, thus increasing its commercial value.