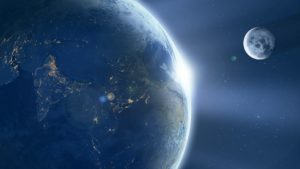 The greenhouse effect is a necessary and positive climatic phenomenon, of heating the lower layers of the earth’s atmosphere, produced by the absorption by several gasses of infrared radiation emitted by the Earth.

This effect consists in the capture of the heat, thanks to the molecules that are found in the air.

One type of molecule passes solar radiation undisturbed towards the Earth, while a second type instead retains and absorbs the thermal radiation and the heat coming from the Earth, itself.

The greenhouse effect is of fundamental importance for living organisms, since reducing the dispersion of heat determines the maintenance of a constant temperature of the Earth.  Without the natural greenhouse effect, there would be no life.

Without these gases the average temperature on the earth’s surface would be around -18 ° C.

The average temperature is instead around +15 ° C.

Carbon dioxide (CO2) has a key and predominant role on the natural greenhouse effect. It acts as a solar radiation filter. It allows short-wave energy (incident) to pass through [UVA and UVB] and instead absorbs long-wave energy, ie the thermal radiation emanating from the earth towards outer space.

In recent years, this effect has increased due to the introduction of large quantities of greenhouse gases into the atmosphere by humans.

The use of GWP weight factors allows, therefore, both combining of emissions of individual greenhouse gases and to evaluate global warming, and to identify the contributions of the individual emission sources to the overall formation of greenhouse gases.. [Source Arpa Lombardia = Regional Agency for Environmental Protection]

Much of the responsibility must be attributed to the production of energy from fossil fuels.

The main “greenhouse gas” comes from the combustion of coal, oil and methane. The activities of thermoelectric power plants, the introduction of combustion fumes produced by industry and the discharge of car exhausts into the atmosphere increase the production of carbon dioxide (CO2).

HOW TO CONTAIN THE GREENHOUSE EFFECT

The greenhouse effect can be contained through: